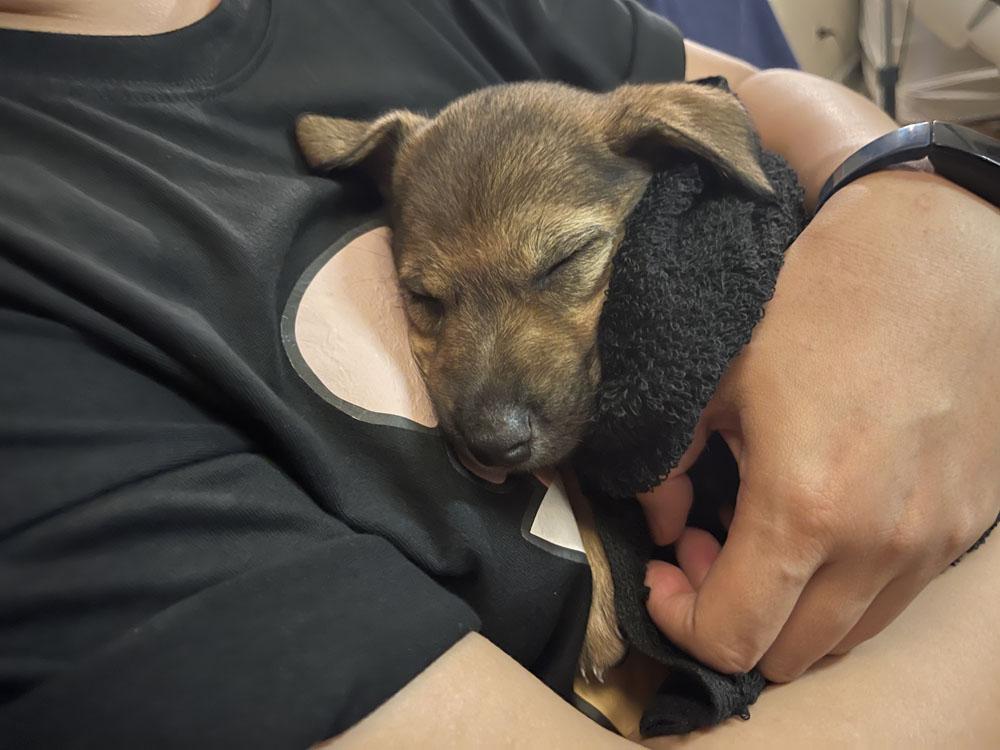 A month after we gave up our pet Bono due to old age, my father adopted a mongrel.

We named him Chimmy, after Jimin’s BT21 character from BTS and even at two months his energy was over the top.

My dad said Chimmy was a purebred Golden Retriever, but growing up we were convinced he was more like a cross between a Belgian Malinois and a Doberman.

According to the vet, Chimmy looked more like a thorn. But no matter how he looked: the dog was strong.

At barely a year old, one excited leap from Chimmy was enough to throw my 66-year-old dad off balance. Without a leash, Chimmy loves running around in the garden, nibbling on dirt or my grandmother’s plants. Sometimes he knocked over garbage cans looking for a snack. Every time we visit him, he throws himself at us with enough force to knock a toddler down.

His strength and energy worried us; there were old people at home.

So I went in search of reliable dog trainers in Metro Manila. In the long list on Facebook Marketplace was “Tonyo” (not his real name), a dog trainer in his thirties with a small training business in Cavite. His FB page was littered with updates and videos about his “protections”.

When I interviewed him on the phone, he seemed like a nice guy who likes dogs. I grilled him on his techniques and he told me about his plans to tame our “hype beast”. He said these behavioral issues can be fixed with obedience training.

Of the trainers I interviewed, Tonyo offered the cheapest service: 15,000 pesos for a month’s board and lodging, provided I send money for food and other Chimmy needs. If it turns out our pet is a slow learner, Tonyo has promised to continue training him for free.

My first mistake was agreeing to Tonyo picking up Chimmy from our QC house.

According to a friend who also sent her dog to boarding school, we should have brought Chimmy to the trainer instead. This way we can see the actual location of his training school. 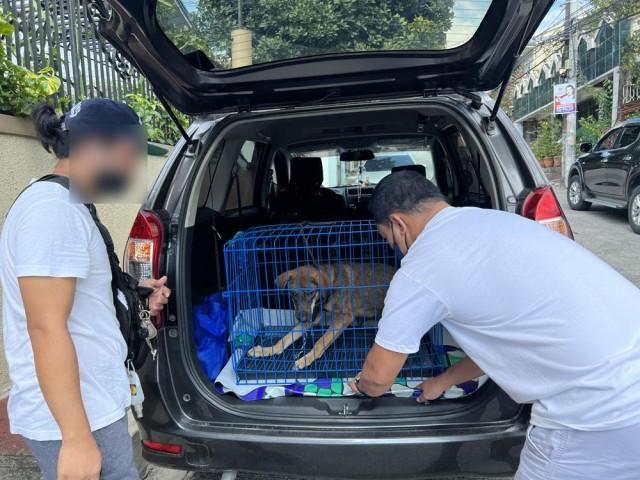 My second mistake was sending Tonyo a deposit of P12,000 without a signed contract. He sent me a digital copy but it was unsigned and I completely took it for granted.

A week into Chimmy’s boarding school experience, Tonyo only sent in one video update: Chimmy eating next to a kennel.

I was constantly texting him asking for updates on Chimmy and Tonyo assured me that he was able to correct Chimmy’s agitated reactions. But every time I asked for proof, weeks went by without a decent update.

A month after Chimmy left, our family started to worry.

When I called Tonyo to pick up Chimmy, things started to go wrong. He kept rescheduling with myriad excuses.

The week he was supposed to send Chimmy home, his line was cut. He also stopped responding to his DMs on Messenger.

On Tonyo’s business page, my sister and I started leaving rants and messages. We received a response from Tess (pseudonym) who was taken in like us.

She needed help with her huge and extremely destructive Labrador-Golden Retriever and the constant messages on Tonyo’s page were enough for Tess. She paid him 10,000 pesos in advance, but after countless postponements, he didn’t even go to her house to pick up the dog.

She asked for a refund, but things turned sour when the coach threatened her partner with assault.

“I want my money back, but my family feared for my safety. People should beware of coaches like him. He’s a hustler and he should be punished!”

To train or not to train

“There is no regulatory body for dog trainers in the country, most professional dog handlers fall under the PCCI, and we know each other because we meet at dog shows,” said Cuevas.

He advised furparents to know the full name and address of their pet’s potential trainer. “Don’t think they are associated with the PCCI if they can’t show a PCCI-issued ID as a trainer. This is for your pet’s safety and you can rest assured that your trainer will be responsible for your fur babies,” Cuevas said.

He also warned people of the risk of searching for pet trainers on social media. Some, like Tonyo, may only have basic training knowledge, which they pass off as professional training: “Some have worked as assistants to professional dog trainers, some are really good with pets , their rates may be cheaper, but you are unsure of the quality of service they will provide.

There is no standard price for the training as most trainers have their own price. Some charge per session, while others charge weekly.

On average, teaching small breeds can cost 500 pesos per day or 15,000 pesos per month. Most of the time, owners will also have to provide dog food, vitamins, shampoo and check-up fees if the animal needs to be taken to the vet.

“You can also have your dog trained even if it is not purebred. We highly recommend it especially if your pet has obedience issues. Just make sure their rabies vaccines are up to date, for your safety and that of your trainer in case your pet becomes aggressive. Cuevas said.

In his experience, it usually takes three to four months before a dog becomes well behaved.

Home service is advisable if a trainer can visit your animal every day, but people on the move send their animals to a “boarding school”.

However, pet boarding schools do not always guarantee that they will be treated “humanely”.

Nena Buczek, a former colleague, shared her experience when she sent her pet “Adobo” to dog school in the United States. She felt that her pet was not well taken care of while they were away, which was why he seemed to be “afraid” of people for a while, “Naiyak talaga ako when I saw our puppy for the first time. Alright na siya, but it took bago siya bumalik a week to get back to being himself.

After posting about Chimmy’s whereabouts on social media, Tonyo finally responded and apologized for not updating us for two months. He said he was unable to concentrate on his duties due to his personal issues. He begged to catch up with us and asked for another week overtime so he could make sure Chimmy’s training was ‘complete’.

He even volunteered to drop my pet off at our home in Quezon City to save us the trip to Cavite.

I obliged. Another big mistake.

A week passed and Tonyo failed to return Chimmy. No video calls either.

Tonyo “ghosted” us again, but luckily this time I had his full address.

We coordinated in advance with the barangay where he said he lived and they confirmed he was residing there. And so we endured over a two hour drive from QC to Cavite. 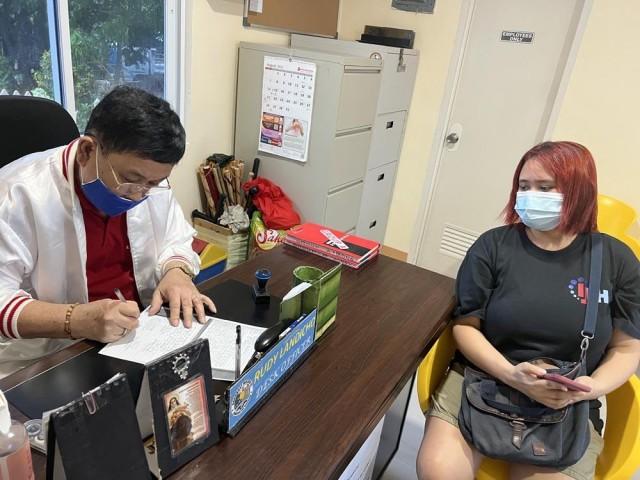 To the barangay hall to get a blotter

When we arrived at the barangay room, we immediately filed a blotter report for security and registration purposes. Then the barangay peace and order officers graciously escorted us to Tonyo’s house.

Our meeting was not as eventful as I imagined. He mumbled a litany of excuses as to why he couldn’t return Chimmy to us that afternoon. The stress of this issue is already taking its toll, so I just asked to see my dog.

I had to hold back my tears as soon as I saw Chimmy. He looked thinner, but his energy level was still through the roof. He jumped with excitement when he saw us, and I was comforted by the fact that at least he still knows us.

We settled the matter at the barangay hall, where we demanded a “demonstration” of the skills Chimmy had acquired during the two months of his absence. Unfortunately, he showed no improvement.

Apparently Tonyo was known in the neighborhood as a dog walker. He worked as an assistant for other dog trainers in the area and when he thought he had learned enough of the ropes, he decided to start his own shop. Business seemed to be going well for the first few months, but somehow his debts and personal problems got out of control and he resorted to scamming his clients.

We filed a formal agreement with Tonyo at the barangay and his family returned our deposit on his behalf. I pushed this article to educate other parents about the risks of hiring trainers through social media. His family also discovered the other victim, Tess. Let’s hope he fixes his problems before resuming his activities.

The drive home wasn’t as “smooth” as we had hoped, as my sister clung to Chimmy as he thrashed and roughly toyed with her in the back of our car. Obviously, he’s still ‘rude’, hyper and untrained, but we’ll deal with that another day.

For now, we’re just happy that Chimmy is back.

Spectrum Canine Dog Training is a premier dog trainer in Fremont, CA with a variety of custom programs suitable for all breeds.