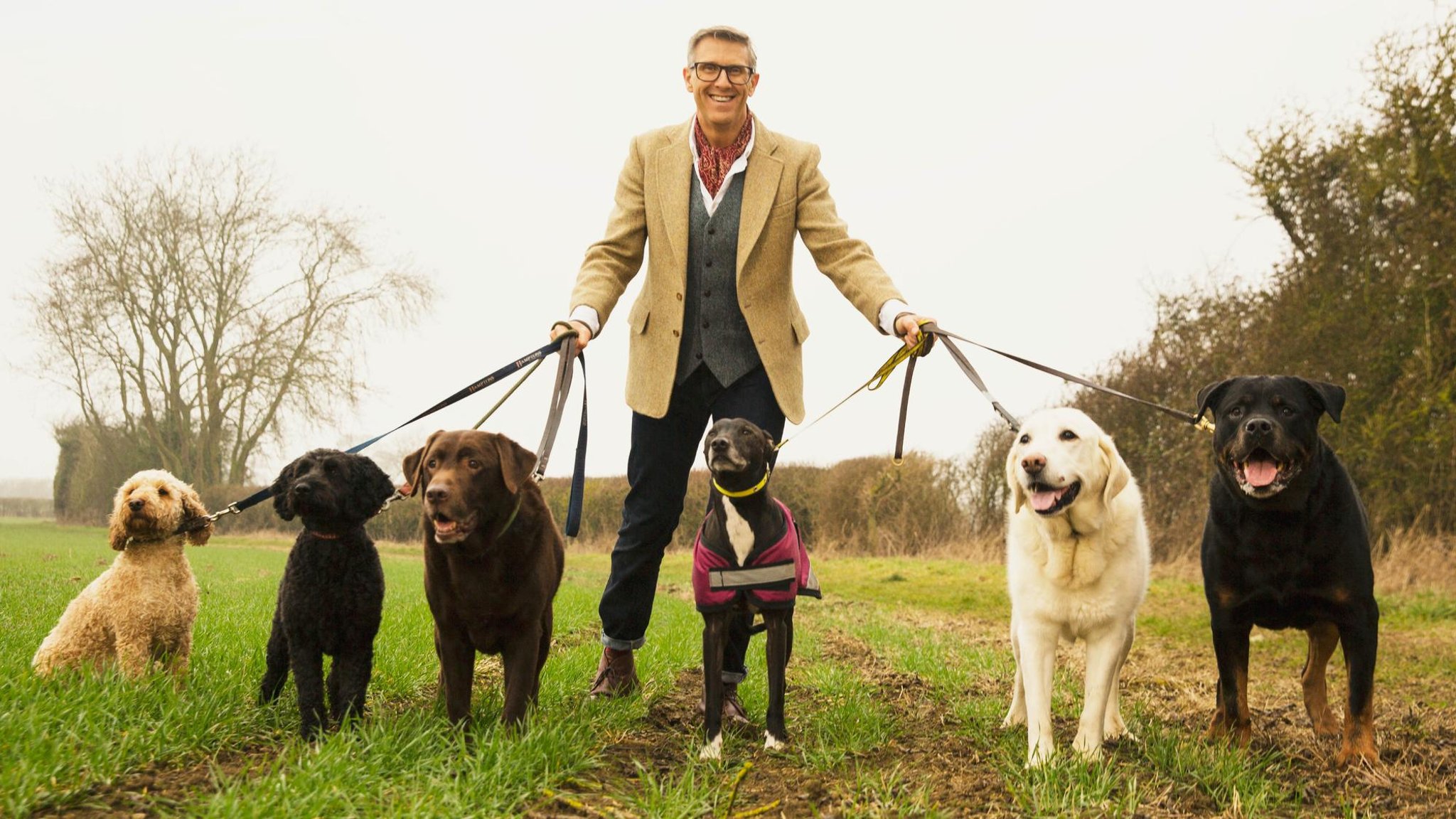 Dog trainer and presenter, Graeme Hall, on his new The Dogfather Live on Stage tour, which arrives in Scotland

Graeme Hall is the Mary Poppins of the canine world.

On his Channel 5 show Dogs Behaving Very Badly, this presenter and dog trainer, otherwise known as The Dogfather, brings his calm and assured presence to the chaotic homes of naughty puppy owners. Dressed in his signature Barbour jacket, jeans and tweed waistcoat, Hall, 56, will step back and calmly assess the situation, whether it’s a barking, humping or scarping problem. .

Specific cases have included a sock-eating spaniel or, in one episode, a border collie obsessed with its own reflection.

Then, he offers positive workout tips that consistently work. Usually, it’s as simple as a change in the tone of voice, when issuing commands, or gentle reassurance.

Unsurprisingly, dog parents love it, so much so that it’s now on tour across the UK, with a Scottish date at Edinburgh Queen’s Hall on May 26. We asked this dog trainer a few questions before his appearances.

Have you ever been to Scotland?

Absolutely. I have worked in Scotland since around 2012 – everywhere from Ayrshire to North Aberdeen and many places in between. I once made the mistake of booking a private dog training session in central Edinburgh in the middle of the festival and couldn’t find accommodation. I love working in Scotland because I’m from Yorkshire and I think Scottish people and Yorkshire people have a bit in common, we like to tell it like it is and don’t beat around the bush. If we love you, you know, if we don’t love you, you know, it all makes us a bit like dogs.

Have you always wanted to work with animals and have you had other career paths?

Growing up in Selby, my earliest memories of local dogs were twofold. One was a poodle called Pepsi who was adorable, but there was a German Shepherd cross, called Bonnie, who chased me down a cul-de-sac one day and almost bit me. I was not a fan of dogs. Mom and Dad were busy working people so it was always a case of, we can’t have a dog, that’s not fair. In terms of career path, I left college with a degree in Hispanic Studies, then worked for Weetabix for 21 years, all the way up. I was ready to become a management consultant, but dog training had become my hobby. At the time I had two rottweiler puppies, Axel and Gordon, and I thought “they must be very well behaved, they are big, powerful dogs”, so I got into dog training as a hobby and I learned as much as I could. I’m one of those people who think that if a job is worth doing, it’s worth doing well. So, by accident, dog training became my job.

Did you grow up watching Barbara Woodhouse?

She was quite creepy and wore tweed skirts. The impression she left on me was of trying not to scare me too much if I became a dog trainer and while I might not want to wear the skirt, tweed is good.

I’m now on the fourth series of Dogs Behaving Very Badly and that means we’ve covered over 100 stories and there’s been a huge appetite from the audience, which I’m eternally grateful for. More and more people are connecting. I’ve written a book and have a podcast so touring seems like a natural progression. What motivates me is to do my best to help people and have a little fun at the same time. It just seems to me that a stage show is exactly that, or should be, for this sort of thing. The promise from me is that you’ll leave thinking it was fun and that I learned things I hadn’t learned before.

In the first half, I’ll explain how I do what I do with the dogs and the rules of behavior, but we’ll also go over a few picks from the TV show. There will be videos and I’ll tell fun stories and let you in on some of the behind the scenes stuff. The second part is a question and answer session. In some “in conversation with” stage shows, the Q&A is there to fill the free time at the end, but for this show, I thought it was important to give everyone a voice. The entire second half is live Q&A, so I literally don’t know from place to place what I’ll be doing in part two, which makes it exciting. I hope we will have dogs on stage in some places. Unfortunately not all venues and local authorities allow this, so where possible we seek to do something with the locals and their dogs on stage.

Does it make you nervous?

Am I nervous? Yes. Am I excited? Yes, and also delighted to bring the show to Edinburgh. Can you be well prepared for what a dog is likely to do? No, and are they likely to be even less predictable on stage in front of a large audience? Yes. Never work with animals and children, I never got the memo.

What were your best and worst moments on TV?

Worse: In this series, for the first time, we had a German Shepherd named Oakley who I couldn’t do anything with the first day I went there. He was a very smart dog, biting leashes and then people’s hands by accident and everything I tried worked for a short time before he thought of a way around it. It was like playing chess with a grandmaster – you think of a move and he’s two steps ahead of you. By the end of the first day we had literally achieved nothing and I left feeling really deflated. I hadn’t given them anything but I had to come back. When I came back with new ideas, some things worked and we got a really good result. It would have been so easy to say that there is nothing to do here. The moment I realized the cameras were on me and I wasn’t going to get a result that day I thought life was like that you can’t predict what dogs are going to do .

Better: We have a lot of fun and laughs, but some of the best are the really moving stories. There was a couple where the dog – a border terrier named Bonzo – separated them. The couple had been together for many years and their relationship was at a stage where the husband was at his wit’s end and ready to leave. His wife separately said “one of them is going to leave and it’s not the dog” and within a day we managed to turn things around. The dog had attacked him – he was just a little puppy. I knew that as I drove away from there I had fixed the dog and I think I put that relationship on the right track. There are times when I’m not just a dog trainer, I’m also almost a relationship counselor. It’s a great feeling.

Are there any specific issues that have become commonplace due to the lockdown?

The one everyone is talking about is separation anxiety. When people returned to the office for the first time in many months, the dogs weren’t used to it, especially the young ones born at the start of the lockdown. All they knew was that people were at their house. Many people wonder about this. Incidentally, if you look really anxious when you leave, your dog will read that you are worried and this will make the problem worse. The more we tell ourselves that there will be a problem, the more there is a problem.

The other thing we haven’t done is invite visitors to our home. So for a dog that grew up in lockdown, he never saw anyone come into his house. I’ve seen a lot of what I call “stranger danger” issues recently where the dog barks, looks nervous or even aggressive towards visitors because they are intruders. The dog does not understand that it is normal for some people to enter the house because for so many months they have never done so. What also happened during this time was that we also received many package deliveries, so many dogs learned to bark. They were barking, the delivery driver was leaving, the dog thought “excellent, I did a good job there”. They learned to bark when people came to the door, and now some of those people come in. What’s a dog to think?

Are we learning new things about dogs all the time?

Yeah, in the years that I’ve done this, we’ve learned so much and there are teams of people at universities all over the world studying them. We now know that dogs look at our faces and understand that there are differences in our facial expressions. It doesn’t quite mean that they understand how and what we feel, because they’re not human, but they do know the difference between a frown and a smile. I can tell you exactly where on a human’s face a dog is looking and you might be surprised to know that it’s your forehead. The muscles of your forehead enliven your eyebrows and make your eyes expressive. So, when we frown, our eyebrows lower, when we smile, they rise slightly. The dogs look at this part of the face, not exclusively, but it is their first stopover and they can read us like a book. We know so much more about it than we ever did.

Labrador owners always think their dogs are greedy and will never stop eating even when full. Turns out 24% of them are right, because that’s the percentage of Labradors that have a faulty gene that means they never feel full. They are literally always hungry in their head. We didn’t know that until a few years ago, so all the time things are moving forward. It’s fascinating.

Do you feel like people are watching you for impeccable behavior when you bring out your very own puppy, Lilydog?

Yes, and in all honesty they really should because if I’m walking my own dog and they misbehave, I’m clearly not very good, am I?

A message from the editor:

Thank you for reading this article. We are counting on your support more than ever, as the change in consumption habits caused by the coronavirus has an impact on our advertisers.

If you haven’t already, consider supporting our trusted and verified journalism by signing up for a digital subscription.