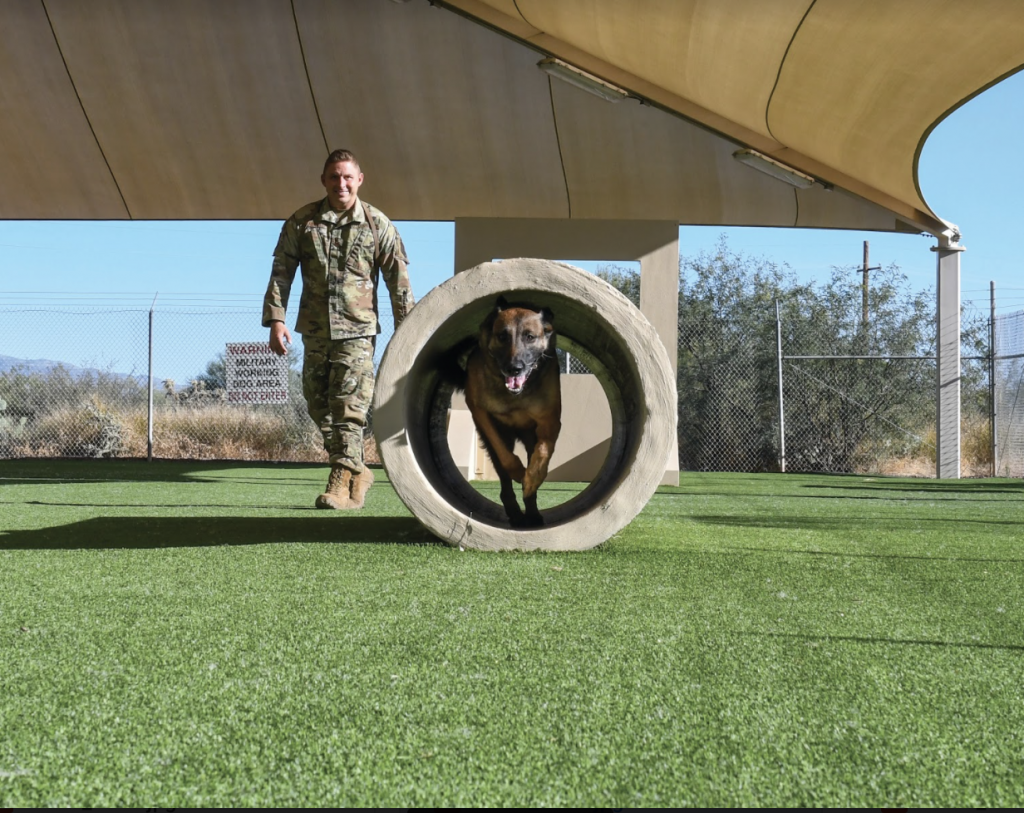 In Reid’s work as a senior MWD trainer, dogs are trained and certified for single and dual purposes. These consist of detection and patrol.

Animals have played an important role in military campaigns for thousands of years. Horses and dogs, in particular, crossed continents with their handlers and masters as support and, at times, as companions in war.

Ancient authors such as Pliny the Elder wrote about a number of breeds used by the Roman army during the expansion of the empire and the different roles played by animals. Among the favorites for their strength and size were the Cane Corso and the Molossian, a probable ancestor of the Neapolitan Mastiff.

During Julius Caesar’s invasion of Britain in 55 BCE, he encountered opposition from Celtic warriors accompanied by their fearsome dogs. In medieval times, it was not uncommon for dogs to accompany knights on multi-year religious crusades.

Fast forward to the turn of the 20th century, and a Belgian Malinois named Taki would become the first dog to be used as a messenger in World War I. Another notable dog during the period was Sergeant Stubby (1916-1926), the unofficial mascot of the 102nd Infantry Regiment assigned to the 26th (Yankee) Division. He served for 18 months and fought in 17 battles on the Western Front. He reportedly saved his regiment from mustard gas attacks, located and comforted the wounded, and grabbed a German soldier by the seat of his uniform and held him until American GIs arrived. Stubby has been called the most decorated war dog of World War I and the only dog ​​to be named and promoted to sergeant in combat. He played such a remarkable role in history that his remains can be found at the Smithsonian today.

During World War II, Belgian Sheepdogs were again used as message carriers, Red Cross dogs and defense dogs. At the same time, there were the United States Marine Corps “Devil Dog” war dog platoons, serving in the Pacific. Composed primarily of Dobermans, the Devil Dogs trained for military service first in Cuba and then at the Navy War Dog Detachment Training School at Camp Lejeune, North Carolina. They were joined there by a boxer named Fritz, who is said to have been the very first dog sworn and signed into the Marine Corp. They acted as messengers, sentinels and scouts and would eventually include German Shepherds, Labs and other breeds. Beginning their service as privates, after five years they could work their way up to the rank of gunnery sergeant, eventually outranking their dog handlers.

In the 1960s, American soldiers continued to work with Dobermans and Shepherds in Vietnam. Although their roles throughout history have been varied, dogs have traditionally been considered too valuable to be sent into battle. For this reason, they came in all shapes and sizes. There was even a four-pound Yorkie named Smoky who helped troops during World War II and later became the world’s first registered therapy dog. For the most part, the work of military dogs includes guarding, detaining, and detecting.

Military dog ​​trainer Josh Reid continues the tradition. Technical Sergeant. Reid is stationed at Davis-Monthan Air Force Base in Tucson. As part of the 355th SFS, his love of dogs and desire to work with them has been a lifelong journey beginning with a canine demonstration he witnessed as a child at the Air National Guard Base of Selfridge, Michigan. A native of Clinton Township, he joined the Air Force in August 2007. In addition to three overseas tours, he was stationed in Colorado, Ohio and North Carolina before finally coming to Arizona.

In his 14 years in the armed forces, 10 were spent with dogs. Reid started out as a manager before moving into a trainer and then becoming a kennel master. His work with military working dogs (MWD) focuses on teaching animals a technique known as Bite and Hold, in which the canines latch onto a subject until a handler – dog can apply handcuffs.

MWDs are not trained to kill. Instead, they are taught to bite specific parts of the body, such as the chest, back, arms, or legs of the individual that they must hold until ordered to release. A good bite consists of contact with all four canines. The move is known as a full mouth bite and is extremely effective in incapacitating fleeing suspects or potential threats.

In order to elicit this response, military decoys are deployed in protective gear to ensure no harm is done to them and the dogs are praised for the level of accuracy they achieve in obedience court. But first, there’s a dog training camp at Lackland AFB in San Antonio, Texas, where initial training takes place. TSgt. Reid says the animals can “disappear” if they don’t meet the program’s criteria. It is the same with all service dog training. Not all dogs are suited for particular tasks, but that doesn’t mean they can’t perform well in other equally important roles.

In Reid’s work as a senior MWD trainer, dogs are trained and certified for single and dual purposes. These consist of detection and patrol. Through detection, dogs look for explosives or narcotics. Both groups are taught the Bite and Hold maneuver by Reid and his decoy assistants.

Last year, Reid participated in the Arizona Law Enforcement Canine Association’s annual Desert Dog Trials in Scottsdale. “The purpose of the gathering was to bring together top law enforcement canine programs to share experience, develop tactics and advance their training.

He also added that there is the aspect of friendly competition between the teams to see who the top dogs in Arizona are. With training and competition, 355th Security Forces Squadron MWD team air personnel are able to enhance the ability to defend the base and ensure the safety of all service members on the installation. . NBF