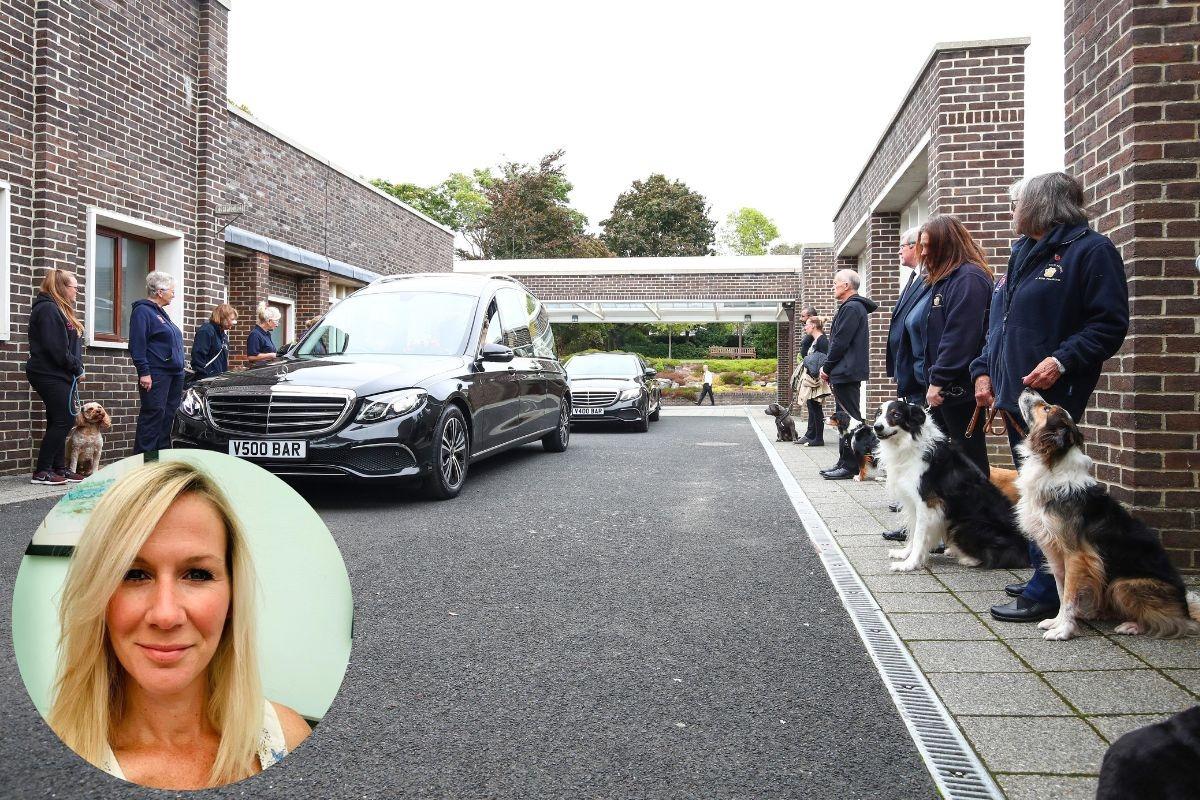 A ‘special’ Waterlooville dog trainer, 42, received an emotional send-off at the funeral, including custody of man’s best friend

Rose Chase, 42, a ‘much loved’ award-winning dog trainer, died suddenly on August 31 of a brain tumor after beating breast cancer, which she was diagnosed with last year.

The mother-of-one from Waterlooville, who received training accreditation at the famous Crufts dog show earlier this year, has been laid to rest at Portchester Crematorium.

A line of dogs was set up as the procession – led by Rose’s two Border Collies, Jack and Bryn – passed the chapel ahead of the service.

Rose’s sister Catherine Gardner said: ‘We couldn’t have had a funeral without dogs. There were so many she had an impact on.

The sister recalled how during Rose’s wedding in 2013, her dog Bryn was tasked with playing an influential role. “When they asked if anyone was against their marriage, Bryn barked,” Catherine said.

Rose’s father Terry described his daughter as ‘incredible’ and recalled how she bravely battled breast cancer, which led to her undergoing chemotherapy, radiation and a mastectomy before she died. receives the “all clear”.

Rose Chase, whose funeral was held at Portchester Crematorium on October 4, 2022.

But from April she began to suffer from migraines before collapsing at home.

Terry added, “She was very spontaneous and could connect with anyone.”

Russell Becque, founder of Portsmouth dog training school The Academy of Modern Canine Behavior and Training, said he spotted Rosie’s talents with dogs many years ago before securing her services .

She went from a trainee trainer to a highly qualified Kennel Club certified trainer – which was introduced to her at Crufts.

Rosie Chase’s friends and colleagues at the Academy of Modern Canine Behavior and Training form a line of dogs for her when she enters the chapel. Photo: Stuart Martin (220421-7042)

Rosie had also taken over the management of the Portsmouth branch of the Academy.

He said: ‘Rose is a big loss for us. She was invaluable to the Academy. She was very professional and good at what she did.

Russell remembers talking to Rose the day she died. “She said she felt much better from the migraines,” he said. “She took a class that night and then went home and collapsed.

“Rose had also battled aggressive breast cancer which she was not expected to survive.”

He added: “Everyone who met Rose loved her. She was very special and someone with a good sense of humor.

Barbara Hannam of the West End School of Dog Training, who Rose would compete with and bring her son to, said: ‘You couldn’t find a nicer person. She was quick-witted and a happy person who never dwelt on problems.

Jean Howells of the Hampshire Working Trials Society said she met Rose in Emsworth when she trained a Staffy who somehow came second in a competition. “Rose loved dogs,” she said.

Dog trainer friend Jodie Philips, who adopted Rose’s two dogs, said: ‘Dogs were her life. As a coach, she knew her stuff.

Ian Spanner, Rose’s ex-husband and father of their eight-year-old son Joel, remembers meeting her at a club. “I went to give him a flaming sambuca but his hand went up in flames. She must have reached out and put it out in a cocktail. It broke the ice between us,” he said.

David Newnham, whose wife Lisa was a close friend of Rose, said: ‘She was always happy. It’s very sad.’

Environmentalist calls for moratorium on sale of fancy breeds