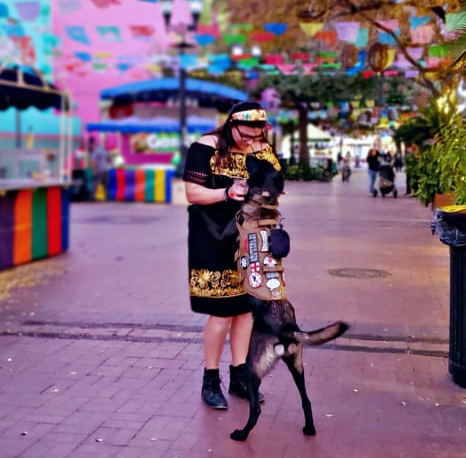 WACO, Texas – Isabella Carruth and her service dog have been stranded in Honduras more than a week after the CDC banned dogs from entering the United States due to a high risk of rabies in the country.

She applied for the import of a dog permit which was denied five times by the CDC — leaving her devastated and wondering when she and her service dog Dante will return home.

“I sent everything they asked for the first time, and now they say I didn’t send them anything,” Carruth said.

Carruth says when she originally booked the trip to Honduras, she filled out all the paperwork required to travel. Two days after her arrival, she discovered that the CDC prohibited dogs from entering the United States from countries with a high risk of rabies.

She immediately applied for a CDC dog import permit, which will allow her to return home with Dante through a CDC-approved port of entry.

In the middle of her interview with FOX 44, she received an email that was again denied – for missing information.

“They ask me one thing. I send it to them. Then they say, ‘Well, you didn’t send this. It’s in the email I sent you. I sent everything. I sent a picture of everything,” Carruth said. “I sent the form from the Ministry of Transport. They said in my next email, we need a Department of Transportation. So I sent that back specifically with everything!

According to the CDC website, the permit application importing a rabies-vaccinated dog includes a personal questionnaire about the owner and the dog — including supporting documentation of the dog’s teeth, vaccination certificate and microchip number — which she says she included.

The application can be submitted in three ways – electronically, by fax or by mail – which is difficult for Carruth to do in Honduras. So her sister in the United States helped her.

“I have email receipts showing that we sent this and they had this information. And all they wanted was the rabies certificate with the license and the vet,” Carruth said. “I sent this, and now they say they don’t have any of the information I sent them!”

Carruth says she’s going to apply for a permit again, hoping this time she’ll get the approval she’s been waiting for.

Meanwhile, she and Dante have run out of food and medicine – and she is struggling to use the money raised from the GoFundMe account for someone to bring it to them.

“It’s about Dante and his coming home,” Carruth said. I can do whatever I have to do for me, but Dante’s safety comes first. Because without his security, I don’t have mine.

Popularity of ‘pandemic puppies’ blows up BC dog trainer’s business