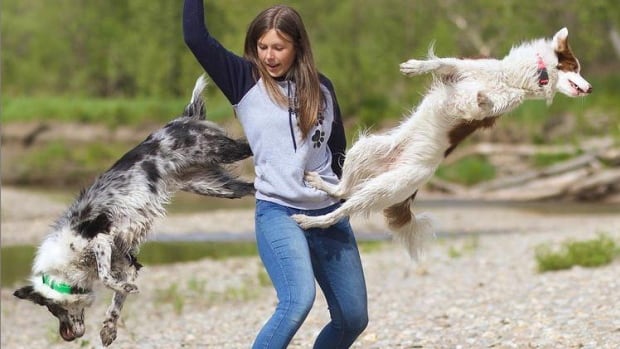 A 25-year-old dog trainer from Thetford Mines, Quebec. shot to fame with an appearance on the weekly competition show American’s Got Talent.

Alexandra Côté and her two border collies, Tesla and Louka, earned oohs and aahs by doing somersaults, handstands and synchronized dancing with their owner, even jumping more than 1.5 meters in the air, jumping rope.

The trio received a standing ovation from the four judges, led by Simon Cowell, on the weekly competition show America’s Got Talent.

Côté has nearly 7,000 followers on Instagram, where she shares photos and videos of her pooches perfecting tricks, flying for Frisbees and exploring the beauty of rural Quebec.

Earlier this year, she received a direct message on the social media platform asking if she had considered trying out for America’s Got Talent.

“Oh my god, it was so surprising, I couldn’t believe it,” Côté said. “Honestly, we didn’t think they would choose me.”

Côté said she was a shy child, but when she got her first dog, Gizmo, at age 14, she found purpose in training him and began to come out of her shell.

Gizmo died at the age of eight, and Côté credits him for helping her find her calling.

In her America’s Got Talent audition video, the trainer cries as she talks about her childhood dog and all he helped her achieve.

She said – especially because she started training them as puppies – that she doesn’t want them to burn out or lose interest, so she limits her sessions to small lessons.

On television and in front of an audience, Côté said his dogs never faltered and they stayed focused on their training and tricks.

“It pushed me to be better, it gave me confidence,” she said of her beloved border collies.

The audition was taped in April, and Côté said bringing his dogs to Los Angeles, Calif., from Thetford Mines during a global pandemic was a feat in itself.

She had to take several COVID-19 tests, fly to New York while Tesla and Louka were transported over the land border, quarantine for a week, then fly to the West Coast to do the show .

Despite the complicated logistics, Côté said her dogs weren’t bothered and didn’t seem to share her stress.

“I was so nervous,” she said, calling America’s Got Talent “the biggest show on the planet.”

On the show, Tesla did the heavy lifting during the performance, with Côté choosing to keep Louka as a surprise guest, who made an appearance near the end, holding a skipping rope in his mouth for his sister to jump on.

Louka remained on stage for the grand finale, bouncing, bouncing, spinning, dancing and dazzling the crowd for a non-stop routine to music.

Côté’s audition video now has nearly a million views, and after impressing the judges, the dog trainer and her pooches are moving on to the next stage of the contest.

They could possibly participate in the live show next month.

Côté said that if she and her pets win the grand prize of $1 million, she hopes to build a dog training center suitable for the winter months, perhaps in Thetford Mines, or perhaps in Quebec City. .

“It was a dream,” she said of her chance to show off her talented dogs and, in the process, possibly earn the funds for her training center.

In the meantime, the Quebecer is working to build her business, and says she has already started receiving a flood of messages from people who want her to train their dog.

As for Tesla and Louka, Côté says they haven’t been spoiled by fame.

“They just want to stay with me and play with me, they’re so happy,” she laughed.