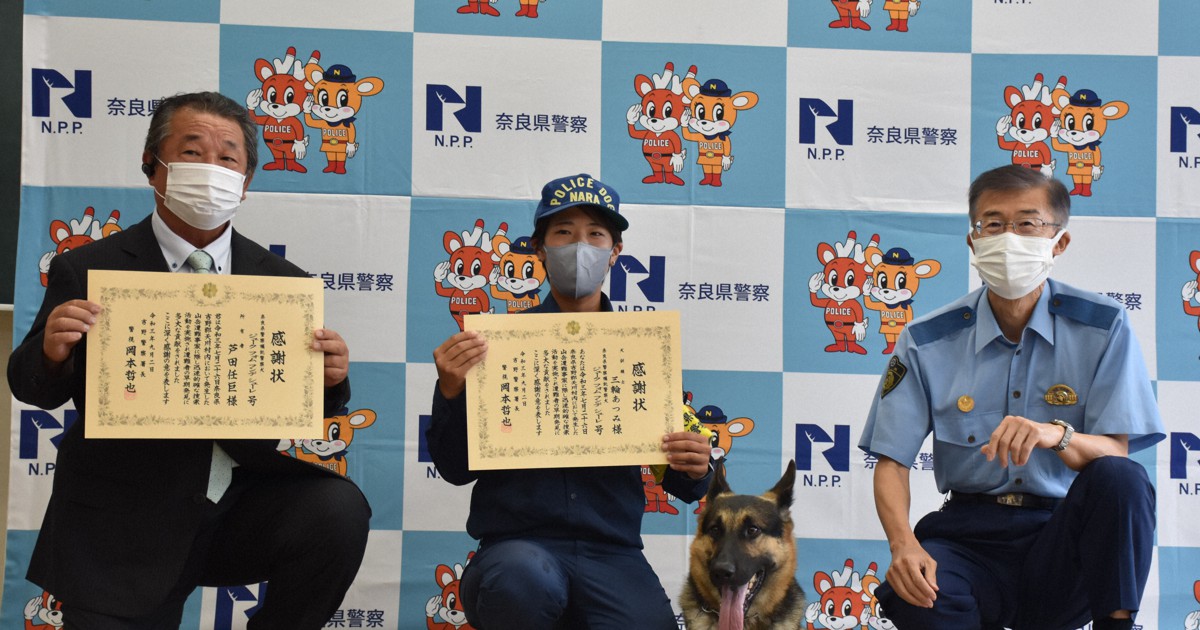 OYODO, Nara — A police dog and his trainer received a letter of appreciation and beef jerky from the Yoshino Police Station of the Nara Prefectural Police for their contribution to the rescue of Shizuo Akira, a specially appointed professor at the University from Osaka and world authority in the field of immunology, who disappeared while mountaineering.

The 3-year-old German Shepherd, named Juke Vom Hunde Schule, has been dispatched 29 times so far, but this is the first time his work has led to a missing person being found.

According to the police station, 68-year-old Akira, whose name has been mentioned as a possible candidate for a Nobel Prize in Physiology or Medicine, was injured and became unable to move while climbing Kannon Peak in Tenkawa, Nara Prefecture, on its owner on July 24.

The police dog and his 25-year-old trainer, Atsumi Miwa, of Kansai Dog School, began searching for Akira on the morning of July 26 using the scent of the teacher’s shirt as a clue, in response to a request from the police station. Around noon, the dog, which Miwa describes as “a bit shy, but cautious and diligent in his police work”, suddenly reacted to something and tried to veer off the mountain path and down into a valley.

Although the two couldn’t go any further because the area was difficult to navigate, the German Shepherd apparently didn’t try to leave the area. A member of the rescue team who then headed for the valley found Akira. The dog recognized its presence from a distance of about 800 meters using its keen sense of smell.

The trainer smiled and said, “It was the first time we searched in the mountains, but he concentrated well during the work. We would like to use this experience positively in the future. Although the dog seemed nervous throughout the September 2 commendation ceremony, he waggled his tail in delight upon receiving the beef jerky.

The German Shepherd is apparently a cousin of Kreva, a Hyogo Prefecture police dog who ran away during a mountain search operation in October 2020, but found a missing person at another search site after returning to his duties after three months of training.