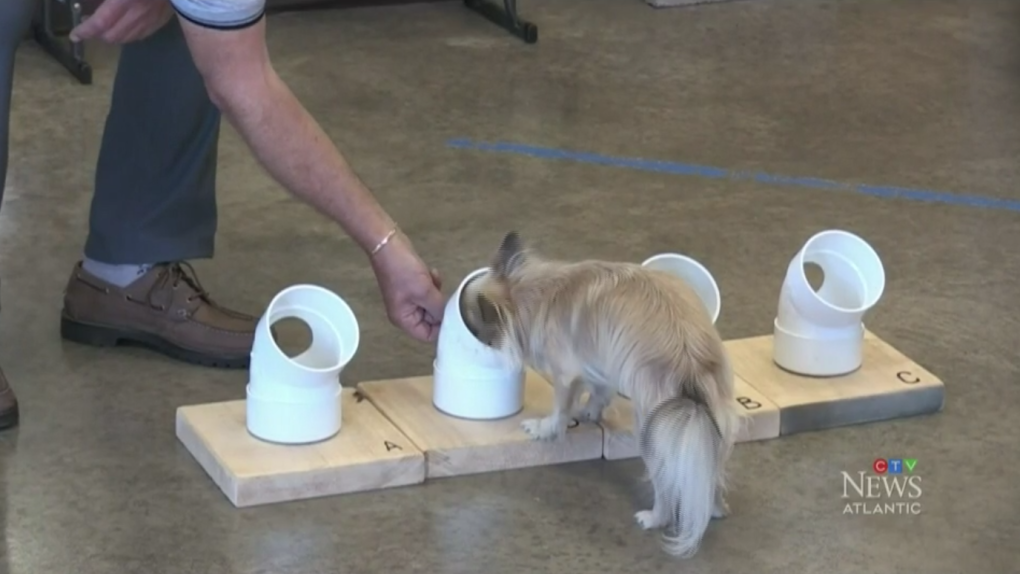 They say you can’t teach an old dog new tricks, but a Maritime dog trainer is teaching dogs how to detect stress and improve the lives of their humans.

Bill Grimmer, an experienced dog trainer in Shediac, New Brunswick, has worked all over the world, training dogs to detect scents during dead body recovery, find explosives and narcotics.

Recently, Grimmer taught three dogs how to detect cortisol, also known as the stress hormone produced by the adrenal glands.

“We learned that cortisol levels can be lowered by a lot of things, like petting something, going for a walk, meditating, things like that,” Grimmer said. “The dog serves a function by coming when it senses cortisol and pushes for a reward, touch, or treat.”

With the help of a lab, Grimmer is able to use cortisol samples to aid in their training. It puts cortisol on a popsicle stick or cotton ball, then hides it in rounded tubes. The dogs are then asked to find the hidden sample and are rewarded afterwards.

“I use cortisol to see if the dog would actually detect it, and then we taught both dogs that when they detect it, they can immediately get a reward in the form of petting and treats,” says Grimmer.

He says the goal is to get the dog into a habit, so the next time he smells cortisol on his breath, then he’ll be trained to go to the person to help calm him down.

As they train, Grimmer’s canids may have the opportunity to put their noses to the test.

“A lot of police have said they would like to have a dog trained like this because it will help us when we interview someone who has been through a traumatic incident,” Grimmer says.

With dogs now being trained to detect more scents, including COVID-19, he believes there is no limit to what a dog can do.

“I just think other trainers could develop this and use it across Canada or around the world to bridge the gap between an emotional support dog and an assistance dog,” Grimmer says.

Dogs with a real nose for the work of comfort and ease for people in need.