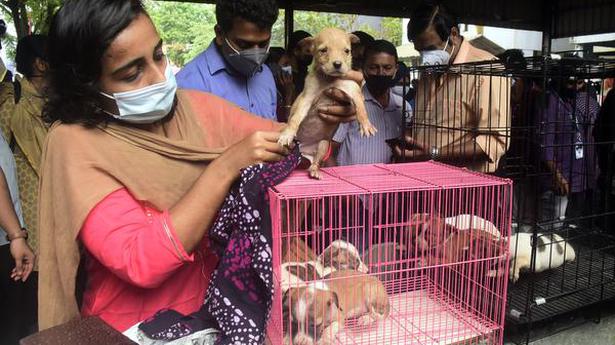 Animals returned after being vaccinated; ownership certificates to be issued later

Animals returned after being vaccinated; ownership certificates to be issued later

‘Bow Bow Fest’, the street dog adoption camp, organized by the Kozhikode Corporation in association with Calicut Animal Rescuers and Encouragers (CARE) and People for Animals (PFA Calicut), witnessed enthusiastic attendance with people who showed up in large numbers at the Tagore Centenary Hall on Monday.

“We brought 80 puppies and gave away 70. It was quite unexpected,” said Derrick Paul, a CARE volunteer who oversaw the adoption process. “There were a lot of takers for the street dogs, some of them were brought in from the Corporation’s Animal Birth Control Center when we brought in some too,” he said.

Some people even brought street puppies with them and handed them over to the organizers. “They brought the puppies in boxes and as soon as the boxes were opened some were reserved by the attendees,” Paul said.

The animals were handed over to the new owners after being vaccinated. Ownership certificates will be issued later.

However, some dogs that did not look healthy, especially those with bite marks, had fewer takers. “It’s about the mindset of people. Even these puppies will look healthy and cute if properly cared for for a week or two. They have better immunity than top breed dogs and half the care that people give to top breeds can do wonders for these street puppies,” Paul said.

Similarly, there were fewer takers for female puppies. Organizers said people didn’t want them because there was a chance they would get pregnant. “This is a problem that can be avoided if the Society assures them of free sterilization of adopted puppies after six months,” Paul added.