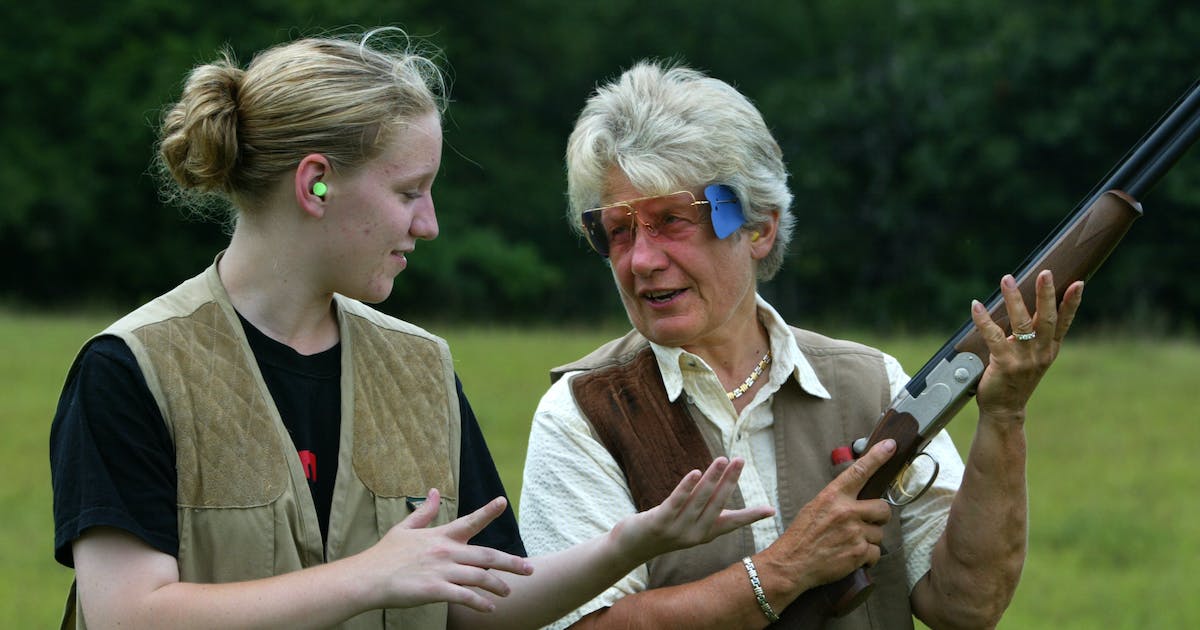 Loral I Delaney, world champion trap shooter and renowned dog trainer who, along with her husband, Chuck, owned Armstrong Ranch Kennels in Ramsey, died on Sunday after battling breast cancer for more than two years.

Delaney was born in the home where she has lived most of her life – on the grounds of Armstrong Ranch, her parents’ game preserve, a kennel, and a mink and fox farm that once spanned 360 acres.

Every August, the current 80 acres of Armstrong Ranch is the site of Game Fair, which the Delaneys founded in 1980.

An animal lover who as a young girl kept everything from raccoons to skunks as pets, 5-year-old Delaney headlined her first dog issue in 1943 at the Northwest Sportsshow in Minneapolis.

When she returned to the same stage a year later, the Minneapolis Tribune gushed: “Fred Armstrong’s granddaughter put her two beautiful black Labradors through a retrieval act that literally brought the house down. “

In the nearly six decades since, Delaney and his dogs have competed in sporting shows from New York to Los Angeles. She often drove herself, pulling a trailer full of Labradors, setters, pointers and Chesapeake Bay retrievers.

“Don’t hunt next to her. You’ll never get a bird.”

Convinced that she could train almost anything with four legs, she once added a pair of half-coyotes-half-huskies to her act. At a sports show in Seattle in 1960, she bought a bear, which she put in her trailer before heading to the next show in Los Angeles.

“We got married here at the ranch in 1960 and came back a year later to take over the kennel,” Chuck Delaney said. “In the meantime, for a year we lived in California. After we got married in Minnesota, we loaded Loral I’s five dogs and bear into the trailer. At one stop in Denver, Loral I brought the bear in a restaurant. It was interesting.”

As a teenager, Delaney had participated in a water-skiing act in which she stood atop a pyramid of skiers. Wanting to up the “wow” factor of the act, she trained the bear to ride a surfboard with her, along with a Chesapeake Bay retriever and a golden retriever.

“The two dogs were sitting in front of the bear; the bear was standing on its hind legs holding the rope, and I was standing behind the bear,” she once recalled. “It was a very big success.

Trapshooting brought Delaney even wider recognition. The first time she competed in the Minnesota State Trapshoot at age 19, she won the women’s title, breaking 197×200. At the same competition, she won the handicap in a five-man shoot-off.

A member of the National Trapshooting Hall of Fame, Delaney was named to every All-American Trapshooting team from 1966 to 1981, except for one year. She has won the Women’s World Flying Championships four times. She shot on the USA women’s trap shooting team before women’s trap shooting was included in the Olympics. And she and Chuck have won the U.S. Husband-Wife Trap Shooting Title four times.

Delaney also won seven Grand American World Trap Shooting Championships, including five in a row, and was the only woman to win more than two in a row and more than four overall.

Among artists, professional athletes, and the very wealthy, Delaney’s prowess with a shotgun and her reputation as a dog trainer earned her rock star status.

“After we got married in Minnesota, we loaded Loral I’s five dogs and bear into the trailer. At one stop in Denver, Loral I took the bear to a restaurant. It was interesting.

Mickey Mantle, Whitey Ford and Billy Martin were regular visitors to the Armstrong Ranch when the New York Yankees were in town. Red Sox slugger and outfielder Ted Williams was a friend. Artists as disparate as Roy Rogers, the singing cowboy, and Barry Gibb of the Bee Gees toured alongside him. She trained dogs for Minnesota Vikings Wally Hilgenberg, Roy Winston and Mick Tingelhoff, among others. And Minnesota business titans Philip Pillsbury and Jim Cargill kept their Labradors in training with her year-round, in preparation for hunting seasons.

“Don’t hunt next to her,” retired Vikings coach Bud Grant told his sons when they hunted pheasants with the Delaneys in Iowa. “You will never get a bird.”

Besides her husband, Delaney is survived by her daughters Sherry Miller (Eric) of Ramsey and Chandra Twede (Scott) of Aliso Viejo, California, and her grandchildren Ana Miller and John Miller of the Twin Cities.

Delaney’s life will be celebrated this fall at Armstrong Ranch.