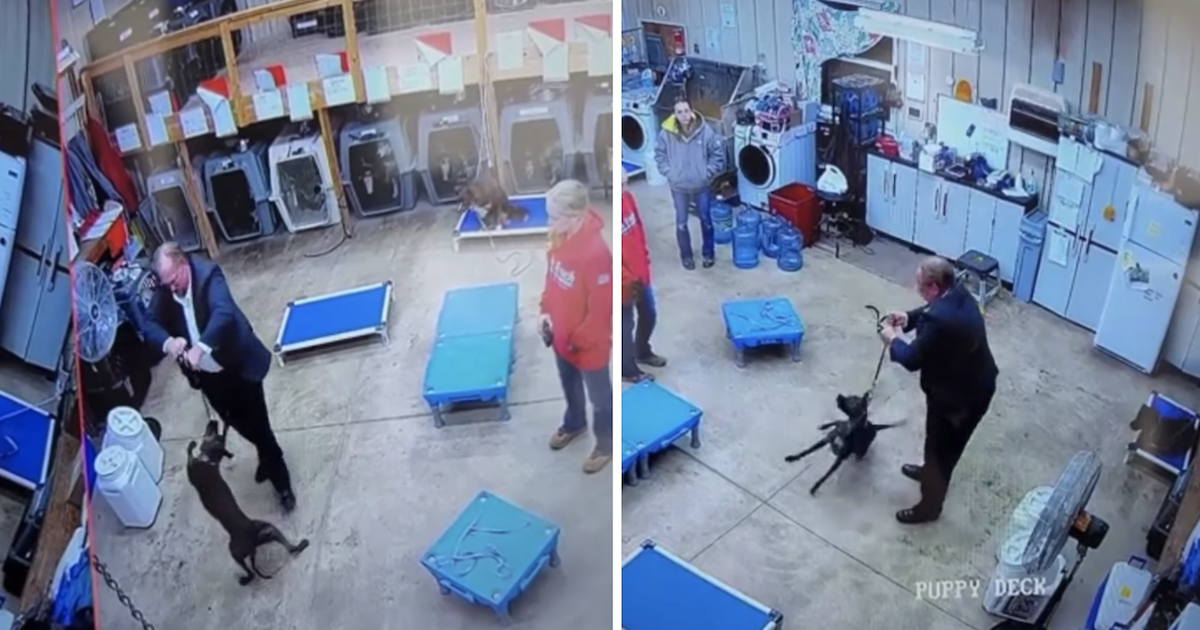 DISCLAIMER: The content depicts animal abuse and may be sensitive to some readers.

A dog trainer from the village of Black Creek, Wisconsin was recently exposed after a gruesome video was made public. Surveillance footage from the facility showed Allen Burnsworth abusing a dog named Odie. The horrifying video quickly gained popularity on social media, prompting a lot of backlash for Burnsworth and his dog training business.

Burnsworth still hasn’t apologized or even admitted his mistake. Dog parents fear he will continue to abuse dogs no matter what happens to his business. So victims and other dog lovers spread the word as much as possible.

Burnsworth is the owner of In Touch Dog Training. In a recent clip from a surveillance video, he can be seen “training” Luke Janssen’s dog named Odie. However, Burnsworth’s form of training is a gross abuse.

In the video, Burnsworth grabs the dog by the leash, which is attached to his collar. He holds the pup up in the air for a few moments before swinging him around and slamming him into the ground. Then poor Odie cowers as Burnsworth appears to order him commands.

“If anyone saw something like this happen to my dog, I would want to know,” said Shaunna Herrick, an employee who quit after the incident.

It turns out that Odie isn’t the only victim of this man’s dangerous training methods. The company has received many negative reviews about dogs coming home injured, but the owner has taken some of them down. A group of old customers also started a facebook group share the word on this inhumane affair.

The dog trainer shows no remorse

Burnsworth refuses to apologize or admit that what he did was wrong. He maintained that he did what he had to do because the dog was biting other staff members. Janssen said Odie was in training for some aggression issues, but Burnsworth’s actions are no way to train a dog. On the contrary, it will only make an aggressive dog’s behavior worse.

“The clip that’s over there is 55 seconds or 54 seconds – whatever it is, less than a minute – of dealing with an aggressive dog that was trying to bite and tried to bite several of the trainers, and they asked me to step in and try to help,” Burnsworth said. “We’ve been railroaded by social media. It’s crazy. We’ve had death threats.

This incident is currently under investigation, but that hasn’t stopped Burnsworth. At first he started closing his business, and he even listed it as “permanently closed” on Google. But now he seems to have reopened it regardless. Burnsworth even tries to make people feel sorry for him.

It’s unclear if the survey will make a difference, but dog lovers won’t give up. With many people spreading the word and sharing their experiences, justice will hopefully be served. Burnsworth should never again be allowed to care for someone’s dog after his disgusting actions.