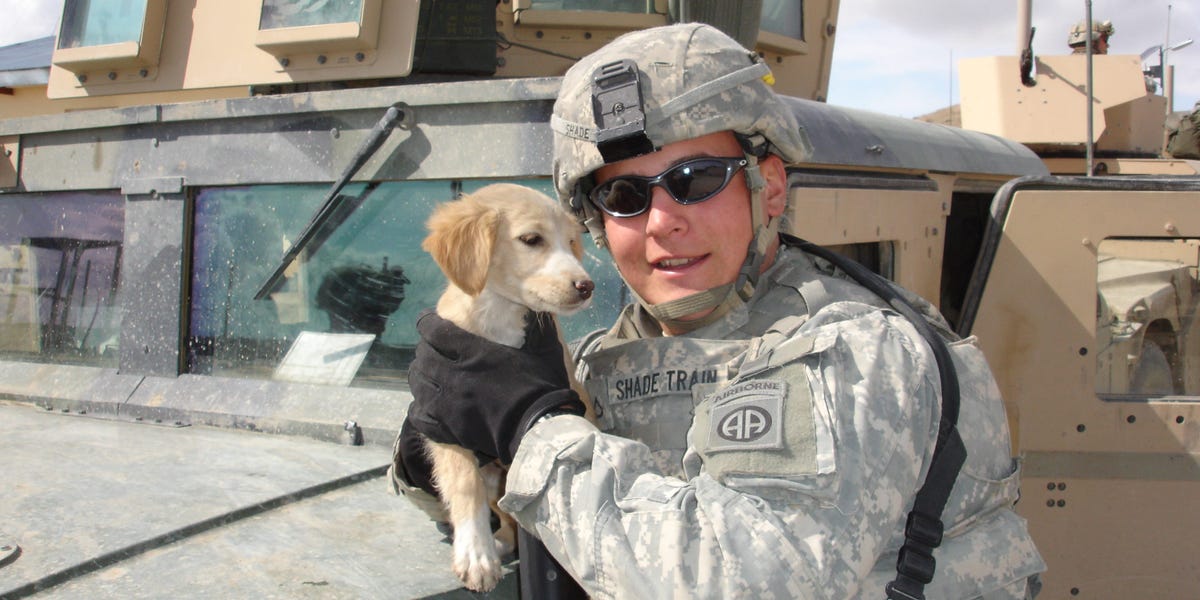 I always wanted a dog, but my mom didn’t think I would take care of it.

At 19, I was serving in Afghanistan and our lead vehicle was hit by an improvised explosive device. Usually I drove this vehicle. But that day, a game of “Rock, Paper, Scissors” decided my crew would opt for a hot meal and a shower instead. The guy in my place — my friend Private Jordan Goode — died of his injuries.

Another time our platoon was ambushed and a rocket propelled grenade screamed at my vehicle. We were hit several times with improvised explosive devices. I blew my knees out and bit the sides of my tongue.

After serving four years, I returned to Pennsylvania with a Purple Heart — and a case of post-traumatic stress disorder. The military trains us not to have empathy. Numbing me made me an effective fighter, but it came at a cost. PTSD feels like being in a dark, dead abyss with no one to talk to and no lifeline.

Now that I was an adult and living alone in an apartment, I finally got a dog. Lulu was a boxer puppy, maybe 10 weeks old at the time. The very first night I woke up to the smell of puppy poo and was on my knees cleaning it up. But a bond has been created between us. Lulu taught me to control my anger. She taught me to live again, to love again, to feel again.

A few months later my then girlfriend (future wife) moved in and we volunteered at an animal shelter. I was going to environmental biology school, which I thought I was doing for a while before turning to doing something with dogs, maybe in my 50s.

We were raising dogs and I wanted to help dogs with behavioral issues, but I didn’t know what I was doing. We contacted all these different dog trainers in our area, but I didn’t have a lot of money and ended up on my own.

When we adopted a second dog named Sammy from a shelter, I started researching how to become a dog trainer and start my own training business. I was so sold on the idea, in fact, that I dropped out of my senior year of college to pursue it.

US animal shelters are overcrowded and about 390,000 dogs are euthanized every year. I want to take a hammer to this number. For about half of the dogs that are rehomed, it’s due to problems such as unexpected health problems, aggression or other behavioral problems.

That’s why I became a dog trainer, and since 2015, Attention dog training has trained over 5,000 dogs. With nine employees, it’s still going strong.

I discovered that I was limited by a riding circumference of around 30 minutes and an inability to realistically scale, which made scaling difficult, so I decided to take our online training with a second company, PupCamp – something I would appreciate when the pandemic hit.

When this happened, we used our facilities to film the lessons. One of my employees had just had a puppy named Gemma, so we filmed 60 Puppy Lessons with Gemma as the star. We quickly added other content to keep clients going after the initial training: videos on how to deal with common behavioral issues, a veterinary behaviorist talking about separation anxiety, and a 30-lesson first aid course.

We now have over 100 lessons, and I have to make time for myself and my own dogs as we grow.

I usually get up around 7am and take the dogs out for their morning walk. It’s one of my favorite times of the day because I get to spend some one-on-one time with each of my three dogs: Otis, Sam, and Sarge. It’s quiet and gives me time to think about business and my team members.

As a professional dog trainer, it’s hard to find the time to train my own dogs. So lately I’ve been trying to dedicate 5-10 minutes a day to working with my own dogs to keep their skills up to date!

I also have a notebook with me at all times, because I’m not the most organized person, but moments of creativity — and ideas for new classes — come up all the time.

I now spend a lot of my time doing meetings, especially on

, discussing with different experts or investors. I also spend time building partnerships so we can offer exclusive subscriber discounts with a toy company, an insurance company, and a food company. I spend time talking with the PR people and filming new courses. We use my dogs and my clients’ dogs for the videos.

Lulu passed away last year during filming, but her work lives on in the work I do. When I was in the army, there was always a mission that we accomplished. Lulu gave me another mission.

Keeping track of the next walk, meal or potty break has added structure to my life. The bond that developed between us was powerful and helped me recover from PTSD. I believe dogs have the power to heal us from trauma through their friendship and guardianship.